TL;DR – Where to Buy Guarana Antarctica?

Want to get some Guarana Antarctica? Get them from Amazon.

Why and Where to Buy Guarana Antarctica?

Originating from Brazil, Guarana Antarctica is a soft drink that tastes mildly like ginger ale and contains all the natural goodness of Guarana, and as far as we’re concerned, it has taken the world completely by storm!

What exactly is Guarana?

Guarana aka Gauranine is a bean originating from South America that packs about twice the punch that coffee beans can ever dream about. All the latest energy drink manufacturers try and sneak it into their blend to up the ante and this bean is making waves across the globe.

Where does the story about Guarana Antarctica Start?

Pedro Baptista de Andrade is the genius mastermind behind the invention that’s literally starting to drive the Brazilian nation, and the world too for that matter. In 1921 he started out producing this drink and it’s now only manufactured in three countries across the globe; Portugal, Brazil and off course Japan. It’s Brazil’s second best-selling drink next to Coca Cola and definitely a market leader, coming in at the 15th most popular drink in the world.

Why is it so popular?

The Guarana Antarctica Company has also been making waves in the advertising industry and one of their most elaborate ads boasted a narrator explaining to the public how the Guarana seed was grown and then they showed a Guarana plantation, at the end of the ad the narrator asks the public to ask Coca Cola to show them their Coca Cola tree. Gripping and funny, yet straight to the point, letting consumers know that they can rest assured that they were using natural ingredients to deliver the best taste!

The mild, slightly apple flavored drink with a distinct berry after taste has the world talking and with the recent explosion of the energy drink industry, it’s on top of the game, being so high in energy from caffeine naturally found in the Guarana bean.

As with all energy drinks, you should definitely be wary of how much of this beverage you consume on a daily basis as some side effects of too much caffeine includes:

Doses of Guarana (in the raw form or as a supplement) exceeding 250-300 mg per day have been reported to have some adverse side effects, and although it’s highly unlikely that one can of Guarana Antarctica has this much extract in it, I bet you would want to know what too much Guarana does to the body.

So what exactly is Guarana being used for?

So one can see that too much of a good thing can easily become disastrous, but also that Guarana can be used to aid various ailments. There are however a few people that should rather avoid Guarana altogether. These people include:

Now that you know a little more about what exactly Guarana is, here is the typical nutritional information of one can of Guarana Antarctica:

It seems like Guarana is another great natural product that is being used to put some spring back in your step with the help of liquid refreshments. Our top picks of Guarana Antarctica include:

The original Guarana Antarctica soft drink, Brazil’s preferred refreshment drink in all its glory comes to you in the original 12 ounce cans. You can buy these cans in a pack of 16 as they might be hard to come across in regular stores and you definitely will want to have more than just one can on hand! 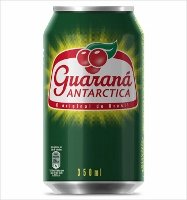 Take charge of stocking up on this refreshing and energizing soda made in Brazil and known for its amazing abilities to aid with numerous aliments. The natural Guarana extract in the drink gives you an almost ginger ale aftertaste and refreshes like nothing else!

So this isn’t the original Guarana Antarctica but if you’re looking for a low calorie version of the popular drink, then this is a great alternative. The 350ml cans provide you with just the right amount of refreshment without you having to worry about drinking your calories.

This product is bottled in the USA so you’ll be more likely to get your hands on this make if you can’t find the original Guarana Antarctica. 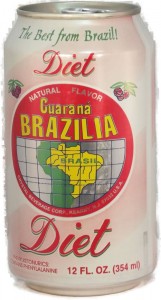 This is the regular and full flavor version of the above mentioned diet soda. It’s still made with the legendary Guarana extracts like those used in Guarana Antarctica but has an aftertaste that is being described as a little more tart compared to the original version. Again what makes this product more widely available and considerably cheaper is the fact that it is bottled in the USA so the playing field for getting stock out to the public is much wider. 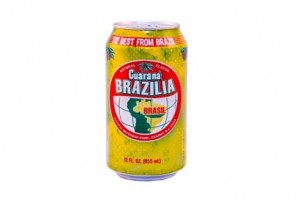 We sincerely hope that this informative article has given you a little insight into what exactly the history of Guarana Antarctica is, what great properties the Guarana fruit seeds hold and why it has become such a popular alternative to the coffee bean.

Obviously we recommend that you try the Original Guarana Antarctica soda from Brazil. The flavor and taste is unlike anything else and is guaranteed to lift your energy levels and refresh you.

Video for Where to buy Guarana Antarctica

Our Review for Guarana Antarctica

Categories
Tags
For Body Builder For Men For Women
Post On: April 2, 2020By Daniel Rhodes In Boost Energy, Energy Drinks
0 4887